Civitavecchia is located 72 km north west of Rome on the "Aurelia" in a central position between Rome and Etruria's heart. The founding of Civitavecchia is put around the year one thousand when the people from Centumcellae came back to the Civitasvetula.
In 1508 Pope Giulio II built a fortress. In XVII century Civitavecchia became the most beautiful port in the Mediterranean. At the beginning of XX century the city became the bridge head between the Sardinian and the continent. The city was completely destroyed by the bombardments in 1943.
Today Civitavecchia has an important role as sea port in the heart of Italy, this function was maximised on the occasion of the 2000 Jubilee when Civitavecchia was the sea extry gate of Rome.

Walking Through The City

The city offers to the tourists the possibility of visiting the National Museum, where you can admire historic Etruscan and roman archeologiacal finds from the surrounding areas as well as from the old port. On the central square there is the Cathedral dedicated to San Francesco D’Assisi built in 1610, the Church of the "Orazione e morte", built in 1685 has a unique "greek cross" shape with simple and elegant architectonical lines. Amongst the oldest churches, you may find the "Chiesa della Vergine" in Piazza Leandra, also known as the "Chiesa della Stella" built in 1274. Toward the end of "Viale della Vittoria" is the "Chiesa dei Santi Martiri Giapponesi", built in 1864 named after Pierbattista and his 25 fellow priests martyred in Nagasaki on 5th february 1597. Medieval city wall from XV century surrounds Piazza Aurelio Saffi, whilst in the Rocca Vecchia yard you may see the remains of X-XII century wall as well as those of the port of the emperor Traiano. Just out side the city you may visit the Roman Spa (Terme Taurine) one of the largest natural thermal complex where hot, earthy sulphate–alkaline water springs have been in use since etruscan times and are still nowadays in use.

The town of Civitavecchia and the surrounding villages make up a natural tourist environment. Starting from Cerveteri where abound and are well evident the remains of the etruscan civilization also thanks to the splendid necropolis in the proximity of the sea, near to Bracciano lake. As you continue, you will find Santa Severa also known for its medieval castle near the sea as well as for the many precious archeological finds from the ruin of Pyrgy, one of the main etruscan ports. North of Civitavecchia you may visit the Tolfa mountains, which climb to 636 mt on the sea level. They are sided by the Mignone river, of naturalistic and archeological interest.

The Lazio Regional Authority has published a series of videos on the beautiful and historic sites and locations in Lazio. Click on the links below to view some of them.

Enjoy the views of Lazio, by clicking on this video link. The film was produced for Roma Cruise Terminal:

The port of Civitavecchia has some architectural interest since over many centuries its basic structure has never been changed. It is surrounded on the east by Forte Michelangelo, a medieval fortress built in 1535 by Pope Paolo III Farnese, but its construction was begun by Pope Giulio II della Rovere as a bastion against foreign invasions. On the city side the port is closed by the battlement wall built by Pope Urbano VIII in the central part of which you may admire the Vanvitelli fountain. Going further west, after the impressive, and recently restored Porta Livorno, you may see the old Rocca, a quadrangular tower built by Calisto III. On the other side of the passage which brings you to the old dock, the impressive wall built by Antonio Sangallo in the XVI century reaches the sea.
The port has been for many centuries the hearth of the commerce as well as of the contacts of the peoples who lived on the shores of the "mare nostrum". Nowadays Civitavecchia enjoys modern and efficient rail, road and air links connecting it to the capital city of Rome and with the rest of Italy and the world.
The port has now become a strategic point of entry of the main Italian tourist areas as well as to the cruise routes. 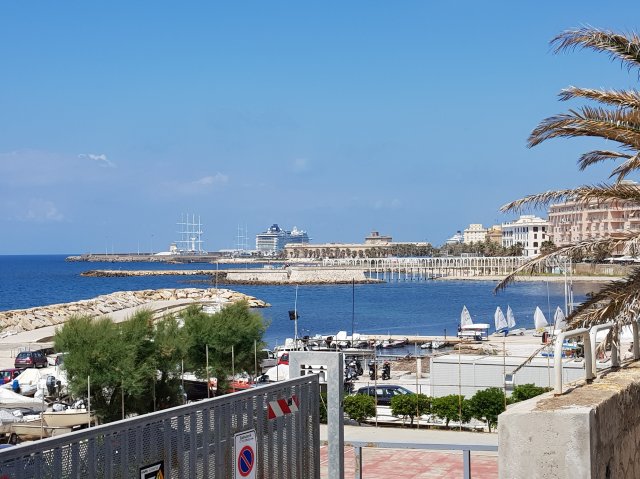 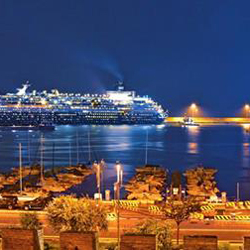 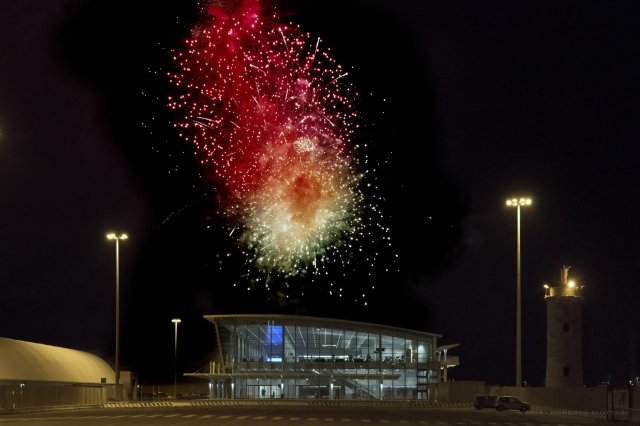 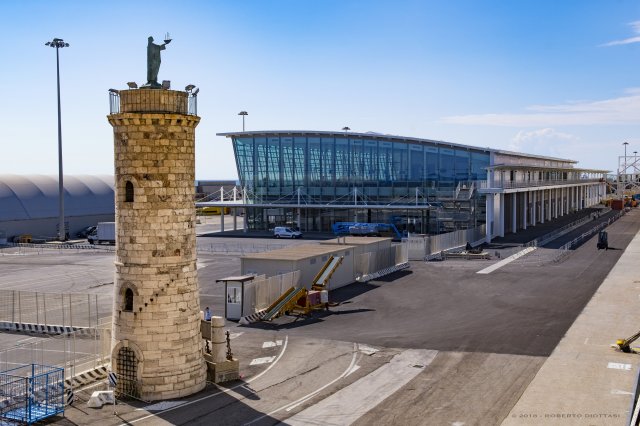